32 years old. Biaritzan, from Quercia Province (Fuchuruseidele in Yei). Demiguy. Gay. Of Yoruba, Arab, English and Ashkenazi Jewish descent. His father is Richard and his half-sister is Lilly. Yavari’s other sister, Elizabeth, is a former frontrunner. Lives in the Wood Between the Worlds and goes to Eimeiseidele to work. Works for the University of Eimeiseidele’s Artificial Intelligence department as a research assistant. Loves electronic music and Eighties music. Definitely autistic. Involved with disability politics. Fairly lefty. Mostly asexual. Panromantic. Atheist. He’s a Ravenclaw. Pronouns: he/him.

Aged 38. Of Russian, German, Chinese and Buryat (indigenous Siberian) descent. considers Biaritza his adopted country and will tell you he’s Biaritzan if asked. Cis male. Temporal physicist, amateur political analyst, philosopher, rabble-rouser and comic relief. Grew up in London until he moved to Biaritza at 18 to go to the University of Eimeiseidele. Married to Yumi since April 2008. Father of Sophie. Best friend is Jack, whom he found on one of his time-travelling trips. Generator of far-fetched ideas. Swears a lot. Thinks English is a very weird language even though he speaks it natively. Democratic socialist. Vaguely theistic. Occasional magic-user. Bisexual. Probably a Slytherin. Pronouns: he/him. Neurodivergent in some way, possibly ADHD.

42 years old. American. Cis male. Grew up in Manhattan; has lived in New York, Boston and Hampshire (not New Hampshire. The original one). Parents are British; they lived in the US during James’ childhood before moving back to the UK. Father of Katie and Florian. Currently lives in Eimeiseidele with Jack, Hess, Yumi, Noël, Katie and Florian. Vaguely spiritual. Married to Jack. Interested in design, art, typography, mathematics, philosophy, and political science. Considers himself a “political rationalist,” though in practice he’ll say that he leans toward being slightly left of centre. Has some classical liberal tendencies. Excessively pedantic, but tries not to be a jerk about it. Moderate left. Hates potato salad and loves egg creams. Can often be found listening to Nicki Minaj. Heteroflexible—Jack may be an exception to his usual rules, but he’s the best exception James could have. Ravenclaw. Pronouns: he/him.

Aged 72. English. Grew up in Oxford. Scientist, teacher, aesthete and classical music aficionado. Formal, friendlier than he sounds in writing. Former system head. Married to Carmen, Posey and Misato. Has five children: Yavari (from a previous relationship), Lilly, Albert, Perpetua and George. Closest friend is Garili. Straight, but poly. Atheist. Politically moderate. Doesn’t front as much as he used to, but is close enough to know what’s going on. Ravenclaw. Pronouns: he/him.

34 years old. American. Californian. Grew up in Oakland. Non-binary. Queer. Loves sociology, neon, loud prints, politics, queer theory and racial justice advocacy. Atheist. Snarky and opinionated. Loves to rant. Definitely neurodivergent. Gryffindor or Ravenclaw. Fairly lefty. Doesn’t front as actively as they used to, but enjoys poking their head in once in a while. Pronouns: they/them or xie/xir.

Aged 23. British/Biaritzan. Cis female. Like Hess, she’s likely to tell you she’s Biaritzan if she’s asked, as she’s spent most of her life there. Originally from Oxford, she’s spent most of her life in Eimeiseidele. Cheerful and friendly, with a bit of a cheeky streak sometimes. Works as an intern at an artificial intelligence research company. Lesbian. Pagan. Witch. Doll collector. Lover of chocolate and sweets. Left-libertarian. Listens to lots of folk, melodic metal and the occasional black metal song. Essentially a Perky Goth. Gryffindor. Pronouns: she/her. 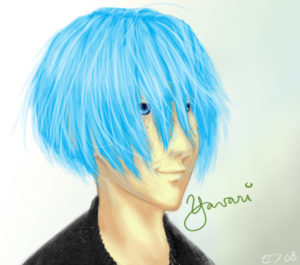 Drawing of Yavari by Setsu, a friend of ours in another system.