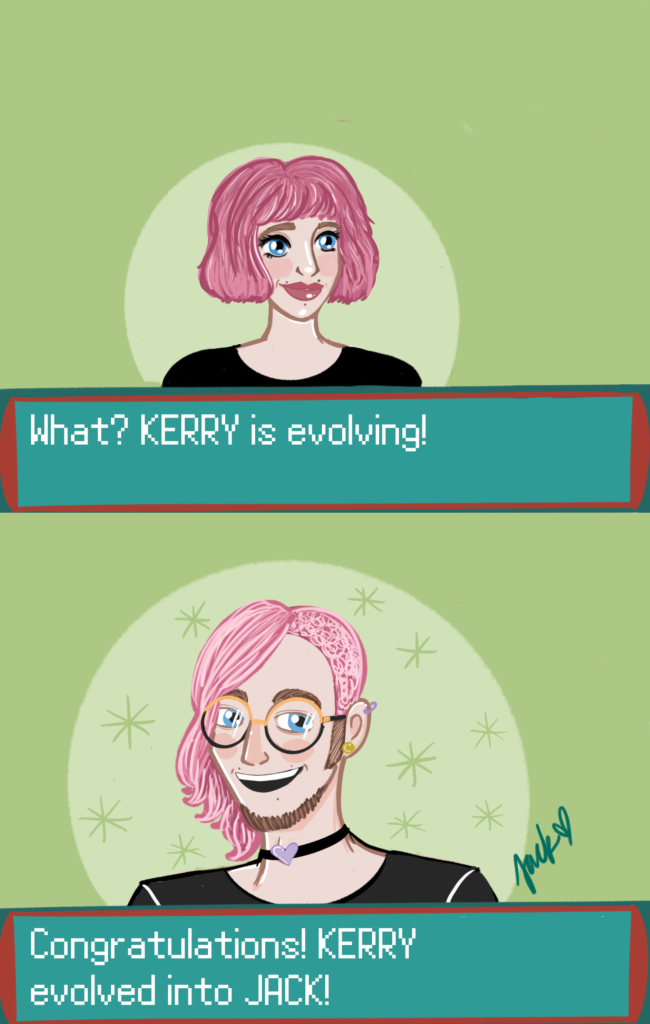 Allow me to introduce myself—properly this time, that is. My name is John Kerry Dawkins—Jack to you—and I’m a trans man. He/him/his, please; no other pronoun will do. I tried manfully to be a woman for nearly thirty-three years, but that just wasn’t me. I’m the leader of Plures House, a bold band of brothers, sisters, mothers, cousins, friends, siblings, husbands, wives, partners, colleagues and crewmembers. I’m a guide, not a dictator—I’ve seen enough tyranny for several lifetimes, thanks. I’m English and Irish and have both craic and a cut-glass Received Pronunciation accent.

I’m a swashbuckling rogue with wanderlust and other lusts: lust for beautiful people, beautiful things and beautiful ideas. (An aside: Lustig is happy in German. I think I’m both lustigand lusty.) I believe words ought to be true, beautiful and kind—and feel just right at the tip of my tongue as I sit down to write. I’m James’s husband and Katie and Florian’s father. Hess and Yavari are my best friends. Richard is the father I wish I could have had, and Lilly is my sister in everything but blood. I’m a feminist, a Social Justice Warrior, a strident male harpy. I listen to playful music to get all the seriousness out of my head when I need to. But most important, I’m (primarily) human.

But that’s just what I am, what I believe and what I am to others. Who am I? I’m a giddy fanboy—not just of popular media, but of existence itself—who’s starting to feel more comfortable being unabashedly geeky. Existence is an ineffable pleasure, though I regret that I wasn’t able to fully enjoy it until I realised who I was. Although my interests—language, data, information, civil rights, politics, activism, computing, sensations, mathematics, typography, design, writing, editing, art—seem distinct, they’re all ways that people experience and communicate their existence.

You’re probably thinking, ‘But, Jaaaaaack! How could you not have known this when you front in a trans male system? How could you have tolerated twelve years of hormone-replacement therapy without realising you were trans?’ Well, we’re all autistic—at least at front—and each of us is autistic in a different way. I’m better at recognising text than subtext, at least when it applies to me. I can see others’ subtext all right, but my own? That’s something else entirely. I’m an intelligent man, but when it comes to knowing myself, I can be a bit daft. I just took myself for granted, so I saw people taking things for granted everywhere. And it took me nearly thirty-fucking-three years to acknowledge that I wasn’t a woman, despite all my archetypal self-images being dandyish, playful, witty, intellectual, sensuous, sensual queer men. (Yes, I think my listening to Taylor Swift’s ‘The Man’ on loop last year was a message.)

But I can always learn to pay more attention to what I am, who I am and how I ought to treat the people in my life, rather than the roles I’m meant to play or the people I’m meant to obey. I don’t exist to serve; I exist to be myself, and helping others is part of that. But that’s difficult to learn when you live in a household—or two, rather, because I fronted here as a child as well—that puts servility over true service, trembling femininity instead of assertive womanhood, and numb masculinity instead of gentle manliness. Or gentlemanliness, which is something that’s in short supply these days.

I grew up in a loveless, austere, conservative household in the 1940s and 1950s—and if you change the decades to the 1980s, 1990s and 2000s, that applies to the system as well. My parents policed my brother’s and my gendered behaviour, but we ended up learning the same lessons, since we’re both gay men. I learnt to be a stoic provider, the impassive breadwinner who shoved all his feelings away in favour of logic and tortuous explanations of my feelings without actually talking about my emotions. My father thought I was too masculine, too forthright, too clever by half—and I had to hide the fact that I was good at sums, much better than any man in my family, but a girl’s knowledge threatens insecure men because it’s a girl’s knowledge. I picked up mixed messages: that it was good to be stoic, that I had to serve without submitting, that I had to submit to please the men in my life, that I had to force myself to be a woman to have a relationship with another man. But all those stereotypes are a lie. I’m a man because I know I am. It’s real for me, and that’s all that matters when it comes to gender. I was finally able to sing with confidence: ‘Baby, I was born this way!’ Being a trans man is about existing in the world as a man even when you’re told you’re not, but you decide that it’s time to live your truth through the strength of your convictions.

The man who loves and fights tenaciously

Sadly, I must confess that my being absurdly feminine made it harder for me to see myself as I was: I’m a dandy, a prancing queen, an exuberantly fey queer man. (Queer’s a lovely word, all glittery and trembling with possibility and excitement—just like me!) I’m homosexual and panromantic—I strongly prefer men as sexual partners but can fall in love with people of all genders. I call myself gay because that’s the culture that feels the most right to me. I’m an unrepentant ethical slut who’s happy to talk about duty-based ethics, compulsory heterosexuality, the evils of the patriarchy—and safewords, cock-sucking, stroking and cuddling. I may be a whore for knowledge, sensuous and sensual experiences, and systems of thought, but I’m not your whore, and I’ll never be anyone’s slave.

Don’t confuse my femininity and exuberance for cowardice, though: I’m made of sterner stuff than that. There’s a reason why I’ve always seen myself as a Gryffindor, not a Ravenclaw.

But I thought to be feminine, I had to be a woman, even though I was all right with other feminine men; otherwise, I’d be something much worse than a woman: a sissy, a poofter, a faggot, a girly-man. When I heard the Donors berating us for our ‘inappropriate’ behaviour, I interpreted it as ‘Man up! You’d better get it right!’, even though they just thought we were hysterical. They really wanted us to be a submissive little girl, a future helpmeet, but because I’m a man, I didn’t hear that. (That’s how trans men have male privilege—although I didn’t know my gender identity, my outlook was implicitly male.) It didn’t help that if I accepted that I was a man, then I’d have to be a white man, and we’re not especially known for healthy masculinity. But being a man of Northern European descent doesn’t determine my moral outlook; I get to choose that myself. I refuse to let white supremacy, toxic masculinity and compulsory heterosexuality rule my life.

The man who lived

I used to think that to be virtuous, I had to be a woman—ironic, given the etymology of virtue. But I had to be conscious of my own virtus—manhood—to understand what virtue meant. I have several examples—men, women and nonbinary people alike—of what it meant to be a good person, a funny person, a loyal person, a creative person, an intelligent person. Our system-mates. Our outworld friends and colleagues. Sojourner Truth. Harriet Tubman. Harry Potter (but not JK Rowling—urgh!). The entire cast of The Good Place. To be virtuous, I had to realise that I belonged to myself. Yes, my duties are important, but I can’t know what my duties are if I don’t know who I am. Otherwise, I’m using faulty premises to make choices. When you start with a bad premise, your argument is unsound, no matter how logical the progression from one bad idea to the next is.

This past summer, I took a stroll with William James and Jacques Barzun—and with various friends of ours. Between bites of artisanal organic chocolate, delicate Spanish tortas and bright-tasting elderflower cordials, I considered my moral obligations to my friends and my system-mates; made lots of cathartic art; and racked my brains trying to work out why even though everything seemed OK, it wasn’t. I read about ethics and psychology and history and sociology, about linguistics and editing and aesthetics. I read Toni Morrison, Susan Forward, Margaret Atwood—but still I didn’t know what perturbed me so deeply. But it took me until last week to learn what I needed to know: I was actually a man all along. This is the first time I’ve been happy in my life. I’ve felt content and pleased and excited and even jubilant. But happiness is something different, a continuous still calm that pushes away the lurking shadows of the past.

And now I know who I am: John (or Seán) Kerry (or Ciarán) Dawkins, best known as Jack. I’m still fond of the name Kerry, but I’d rather (be) Jack. If you still slip in the habit of calling me ‘Kerry’ and ‘she’, that’s all right; my headmates are still getting used to it as well. I’m not a woman, but Kerry was the best distaff counterpart I could have. But she wasn’t the best me I could be.

All the same, I know that you—headmates and outworlders alike—are on my side. James is proud to have me as a husband: he loves me, not my role as his wife or the letter printed on my birth certificate or whatever is or was between my legs or the timbre of my voice. That’s what real love is. When you love someone, you enjoy who they are, not just what they are. Anything else is just role-play.

I’ve been trying to squeeze myself to make room for everyone else, but it’s time that I got a room of my own. I need to remember how to enjoy life. After all, all work and no play makes Jack a dull boy. They may have tried to bring me down, but I’m still standing, and I’m glad to stand alongside you. Harry Potter was the Boy Who Lived, but I’m the Man Who Lived. Thank you.